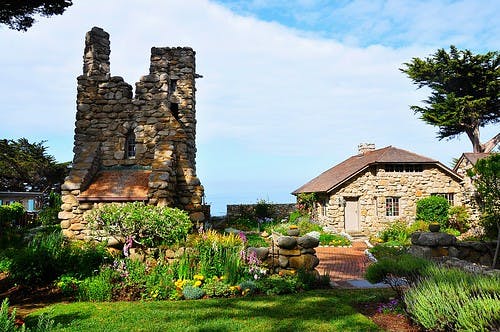 “We must uncenter our minds from ourselves;
We must unhumanize our views a little, and become confident
As the rock and ocean that we were made from.”
– Carmel Point, Robinson Jeffers

Tor House is one of the most enticing attractions in Carmel, California. The idyllic stone cottage was once home to American poet Robinson Jeffers (1887-1962).  He and his wife Una fell in love with the location in 1914. Over the next four years, using granite boulders from Carmel Bay’s rocky shoreline, Jeffers built Tor House and Hawk Tower and made it home for himself, Una and their twin sons.

Modeled after an English, Tudor-style barn, the cottage was originally comprised of a living room, main floor guest room, small kitchen, two attic bedrooms and one bathroom.  A dining room was added later. Jeffers built the accompanying Hawk Tower, as a retreat for his wife and sons, with his own two hands. The 40-foot stone tower offers a breathtaking view of the rugged California coastline, which Jeffers and his wife loved so much.

Here, on the Carmel-Big Sur coast, Jeffers penned narrative and epic poems as well as short verse, all of which he soon became highly regarded for. One of his most endearing poems is the famous “Tor House,” which encapsulates the soul-stirring atmosphere that surrounds the salt-licked air and rugged granite. As well as the Carmel landscape, Jeffers’ themes included moral despair and conflicting desires. His style was a self-professed “inhumanism” through which he expressed the need for human beings to decenter themselves and connect to the magnificence of the inherent beauty in the world.

During your tour of Tor House and Hawk Tower, you can enjoy a leisurely stroll through the vibrant English cottage garden and slip back in time to the romantic era of Carmel’s revered poet. Throughout the year, Tor House hosts a series of poetry readings and performances. The enduring building retains the timelessness of Jeffers’ work. When you visit this treasure you will truly appreciate the beautiful Carmel landscape that inspired many of his poems.

Purchase a fantastic gift or gifts: each gift certificate can be specific to one of our offerings, or in a custom amount so the recipient can choose